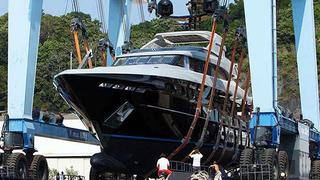 Nameless is a custom yacht built in aluminium on the successful 40m platform developed by Mondo Marine. She is the seventh collaboration between Mondo Marine and yacht designer Cor D Rover, who styled another elegant design featuring a complex combination of convex and concave surfaces.

The interior, designed by Luca Dini, is described by him as 'a soft contemporary classic atmosphere, cool, smart, eclectic and delightfully vain.' It accommodates up to 12 guests in five cabins. The full-beam master suite is on the main deck while all the other guest cabins are on the lower deck: two full-beam VIPs, and a double and twin, both with Pullman berths.

Nameless is scheduled for a delivery in August, and she will make her debut at the next Monaco Yacht Show. Mondo Marine has three other projects under construction between 50m and 55m.