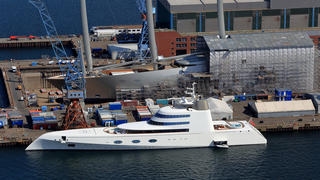 Motor Yacht A meets Sailing Yacht A in Kiel

Two of the most distinctive superyachts in the world were pictured alongside each other for the first time in Kiel over the weekend, as Motor Yacht A moored up alongside Sailing Yacht A.

Both vessels are owned by Russian industrialist and billionaire Andrey Melnichenko and this rare sighting of the iconic pair gives a sense of context to their mind-boggling scale.

Sailing Yacht A is currently under construction at German yard Nobiskrug’s Kiel facility, with delivery scheduled for early 2017. The overall length of 142.81 metres will make Sailing Yacht A one of the largest superyachts in the world.

With a beam of 24.88 metres, this sail-assisted motor yacht is a record breaker, with the largest carbon fibre masts in the world.

Starck has once again provided the exterior lines and interior décor. Speaking about the project last year, he said: “I am honoured and happy to bring to life the owner’s dream of what will be the summit of high technology and poetry.”

The reason for this extraordinary superyacht congregation has not been confirmed, but it certainly was a fleeting visit, with AIS data showing that Motor Yacht A had left Kiel by Monday afternoon.

The sheer size of Sailing Yacht A has attracted widespread press coverage all across the world, however she is not the largest superyacht under construction, an honour which goes to the as-yet unnamed 146 metre project currently in-build at Lürssen.