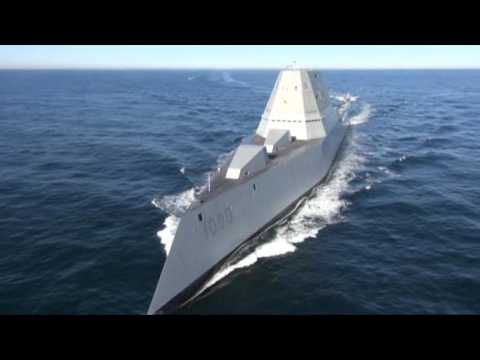 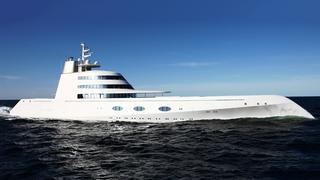 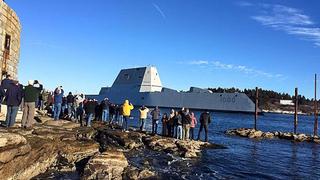 Could this huge navy destroyer have inspired designs for Motor Yacht A?

The futuristic 182.9 metre destroyer USS Zumwalt has a wave-piercing tumblehome hull, a reverse bow and a carbon fibre deckhouse that rises dramatically from the otherwise low-profile deck.

Boat International was informed the designs of USS Zumwalt originated as long ago as 2005. Her unusual shape has caused parallels to be drawn between the stealth destroyer and the iconic 119 metre Motor Yacht A, launched a few years later.

The USS Zumwalt, built by General Dynamics at Bath Iron Works in Maine, is currently undergoing rigorous sea trials to determine if she is ready to become an actively commissioned warship.

The Philippe Starck-designed Motor Yacht A, which split opinion when she was launched for forward-thinking owner Andrey Melnichenko, has become one of the most recognisable superyachts on the water and made it onto our list of the five most divisive yachts. She was recently spotted in a dry dock in Malta.

The head turning lines of Motor Yacht A may be aesthetically pleasing, but the angled exterior of the USS Zumwalt has a very practical use. The stealthy design makes the ship less visible to radar detection, apparently providing the same target as a small fishing vessel.

Despite the distinctive shape of the two vessels, this is where the similarities end. The usual features of a luxury superyacht give way to a navy ship that is fully equipped for the 21st Century.

The first one is currently fitted with two 155mm guns for use against large ships, as well as a plethora of other guns and missiles. A landing pad on the aft of the ship has space for two helicopters or a number of drones, while advanced levels of automation allow for a much smaller crew than current destroyers.

The innovative electric-powered motors may one-day support energy-intensive weapons such as electromagnetic rail guns and free-electron lasers. These futuristic Star Wars weapons are currently under development.

The USS Zumwalt, the first of three Zumwalt-class ships, has taken four years to build at an estimated cost of $4.3 billion. The ship’s skipper, Navy Captain James Kirk, said “we are absolutely fired up to see Zumwalt get under way. For the crew and all those involved in designing, building, and readying this fantastic ship, this is a huge milestone.”

Love it or hate it? The most divisive superyachts

Exclusive: 6 facts about the build of Sailing Yacht A