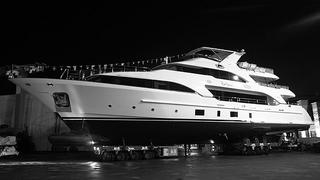 Last Thursday another yacht in the successful Benetti Classic series was launched in Viareggio. Previously known as hull number BC129, she’s been christened Dyna.

Introduced in 1998, the Classic series has had multiple incarnations along the way, the latest being the Classic 121, which was unveiled in 2011. Dyna is the fifth motor yacht of that incarnation.

The Classic 121 is a composite yacht of 36.9m designed by Stefano Righini. She carries the design DNA of her predecessors with extra details like a hard-top over the sundeck and large portholes in the hull. As standard, she accommodates 10 guests in a full-beam master, two double and two twins.

Dyna will be delivered for the coming season.