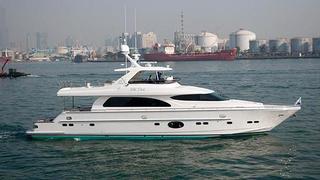 Wild Duck is a customised version of the Horizon E78 motor yacht series designed by John HV Lindblohm and the in-house team. Her stern was lengthened to add a fishing cockpit.

The interior, a combination of warm walnut and dark camphor woods with neutral soft goods, accommodates eight guests in four cabins including a full-beam master.

Wild Duck will be delivered to her US owners in February. She's also scheduled to make her debut at the upcoming Palm Beach Boat Show in March.