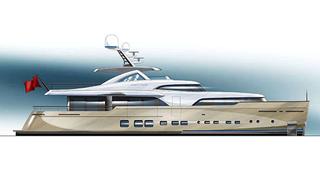 Dutch yard Mulder says it is on track to deliver its largest ever yacht, a beefy looking 34m motor yacht, in summer 2015.

The yacht marks a serious step into superyacht territory for the company, whose next biggest boat is a 28.65m Mulder 94 also currently under construction. Mulder signed the new build order for the 34m superyacht – its largest yacht yet – in November 2013. The hull and superstructure of the steel-constructed 34m are expected to be delivered to Mulder’s Zoeterwoude yard in The Netherlands in late July. The engines and generators will then be placed in the hull after which the superstructure will be lowered into place and joined with the hull.

‘At thirty-four metres, it’s our biggest ever and it’s our first time building over three-hundred gross tons,’ says Nick Mulder, Mulder Shipyard’s sales manager.‘It will, of course, be built to the highest standards and be a really special boat.’

Responsible for the exterior and interior styling is British design agency Claydon Reeves, with naval architecture coming from Van Oossanen Naval Architects. Guest accommodation comprises two VIP staterooms and two double staterooms – all en suite – while living spaces on the main deck should be open and bright thanks to wraparound full-height windows and a fold-down balcony.