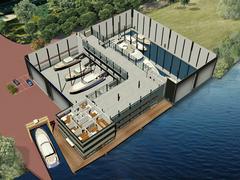 Mulder Shipyard’s managing director Dick Mulder has laid the foundations of a brand-new facility in the Netherlands, 20 minutes south of Amsterdam Schiphol Airport.

The special ceremony marked the end of several years of planning on the multi-million-euro investment, which is situated 10 kilometres from the current Mulder facility.

This state-of-the-art yard will cover an area of 7,000 square metres and be focused on the maintenance, refit and new build of yachts between 18 and 40 metres. Due to open in 2012, the first new yacht from Mulder’s order portfolio will be launched there in 2013. The existing facilities will also remain open and be dedicated to yachts under 18 metres.

The first hall of the new yard will be equipped with two dry docks of 55 by 13 metres, while the second will allow for four yachts up to 30 metres in length to be simultaneously constructed. There will also be a 100-tonne boat lift and a modern office building.