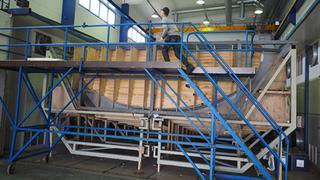 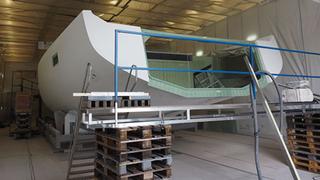 Finnish yard Nautor’s Swan has revealed the first in-build photos of the third and fourth hulls in its Swan 78 sailing yacht series.

It comes after the successful delivery of the first two models, Kinina and Haromi, earlier this year. Kinina will be presented at this month’s Cannes Yachting Festival and both yachts will attend the Rolex Swan Cup in Porto Cervo.

The third and fourth hull are now being “carefully handled’ by Nautor’s plug, mould and paint teams.

Developed in collaboration with German Frers, this 23.99 metre design features a modern, uncluttered deck layout for simple sail handling. Owners who enjoy cruising with minimal crew will benefit from the five electric winches situated close to the helm stations.

The cockpit meanwhile will be protected from adverse weather conditions by a wide sprayhood and will include two C-shaped settees. The large transom will open to create a four-metre-wide swim platform.

The layout is open to customisation. The owner’s cabin can be situated either in the bow or stern while both configurations accommodate a total of eight guests across the remaining two twin cabins and a double cabin. The crew quarters meanwhile allow for a staff of two.

The news follows the launch of the fourth hull in its Swan 115 sailing superyacht series, the 35.2 metre Odin, last month.