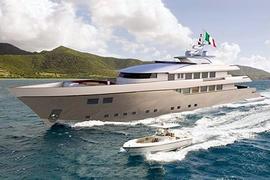 The Nedship yard in Antalya, Turkey is now coming now closer to the launch of the new 42m displacement motor yacht BaiaMare.

The yacht will be launched in June 2011 and is scheduled to be handed over four weeks later to a new owner. Ready to cruise this summer, she’s now for sale by the yard, asking €12.9 million.

Key features include her build in epoxy composites with carbon reinforcements and she has a spacious layout for 12 guests with a master suite and VIP stateroom on the main deck plus four guest cabins on the lower deck. A tunnel propulsion system will give her hull better efficiency and lower draft and speeds are expected to top 18 knots, while BaiaMare will cruise at 15 knots.