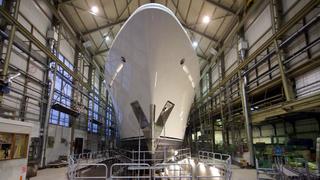 It's no secret that the financial crisis seems to have had less impact on larger yacht production and many shipyards have increased their capacity to build larger yachts. In line with this trend, Dutch family-owned yard Hakvoort has just announced an upgrade of its own facilities, which will enable it to deliver yachts of over 50 metres in length.

Hakvoort's new slipway, which has a maximum lift of 1,000 tons, is now ready, enabling the yard to construct yachts of up to 58 metres in length and 11.50 metres in width. This follows its vertical expansion in 2009 when the roof of the yard's main shed was raised to allow for the construction of four-deck yachts.

Hakvoort's flagships are currently both 50 metre yachts: Hadia (ex JeMaSa) and Lady M, launched in 2006 and 1994, respectively, but these could be replaced by a new 50 metre plus yacht, which, if commissioned, Hakvoort would be able to deliver in early 2014.