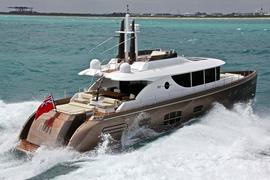 The first hull was recently delivered and featured in the April 2011 issue of Boat International. She was first presented to the public at the Miami Yacht Show in February. This is where the North Americans who have place the order were introduced to the series.

The NISI 2400 is a 23.6m semi-custom yacht designed by Ward Setzer and the yard's in-house team. She's the first yacht under 100ft to be RINA classed and MCA compliant.

This second hull, now referred to as NISI 2400GT, will be customised according to the wishes of the owners: her LOA will be extended to 24.38m, her sundeck will be expanded, a Jacuzzi will be fitted on the aft deck, and the propulsion will be limited to two pods, though she wil still have a top speed of 30 knots.