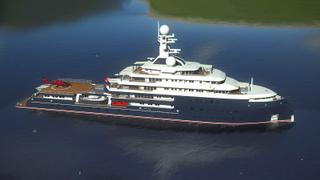 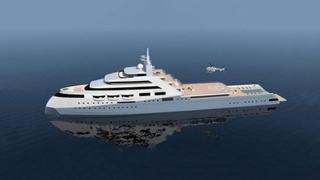 A new rendering of the 109 metre new-build superyacht Project Icecap has been released.

The new rendering is noticeably different from the initial image that was released earlier this year and shows the five-deck motor yacht sporting a blue hull.

Notable features include an aft deck helipad and an inverted bow design hinting at polar cruising capability, something that is reinforced by the choice of project name.

It comes after the superyacht was sold by Moran Yacht & Ship earlier this year. The company is also project managing the build process.

Project Icecap will feature a total interior volume of more than 6,500GT and be built from steel at German yard Lürssen, with a projected launch date of 2021. The yacht's existence was first revealed in the 2018 Global Order Book.

Details are few and far between but it is understood that Project Icecap will feature state-of-the-art energy saving, power storage, heating and cooling systems. Her interior will reportedly offer luxurious accommodation for up to 20 guests split across ten cabins.

Moran Yacht & Ship previously revealed that the yacht will be powered by a diesel-electric propulsion system. The asking price of Project Icecap has been withheld.

Other 100 metre plus superyachts currently under construction at Lürssen include the 139 metre Project Redwood — a scheduled 2019 launch.