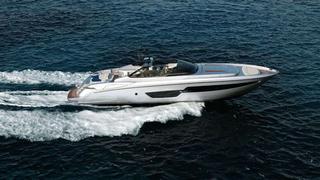 An open version of the Riva 86 Domino, this model was inspired by conversations Rossi has had with the legendary yacht builder who founded the Riva line. 'Carlo Riva is always speaking to me about the stars,' Rossi said, recounting a story Riva told him about being on an open boat at sea back in the 1940s. 'He said, "I am the richest man in the world – I have all the stars.”'

The 86 Open features a very innovative piece of technology: its new cabriolet-style hardtop. At the touch of a button, side panels on either side of the yacht’s foredeck, just forward of the windshield, open to reveal arm-like cranes. These 'arms' move forward to pluck the hardtop off the bow cockpit it conceals when in storage mode, then move to top aft to shade the helm station. It works much like a sporty convertible’s top.

'We call it the Spyder effect,' Rossi said. According to Rossi, the 86 Open is one of the biggest open models available in the yacht market today. 'It is one of the fastest, at 40 knots,' he added.

The Riva 86 Domino Open is scheduled to premiere at the 2015 Miami Yacht & Brokerage Show.