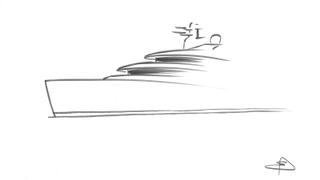 German yacht builder Nobiskrug has announced the signing of a new 62 metre superyacht project designed by Espen Oeino. Imperial brokered the sale and will stay on as the owner's representative and construction supervisor during the build process. This is the second recent project that Imperial has brought to Nobiskrug this year.

The design by Oeino blends contemporary and classic elements. The new 62 metre Nobiskrug will have a vertical bow and modern exterior lines. Only a sketch has been revealed at this time, but Nobiskrug reports that the yacht will have five decks and boast generous and meticulously planned open areas.

The yacht will have a high volume allowing for large living areas for her owners and guests. Beyond the main saloon, skylounge and beach lounge, there will be a wellness area and a seven-metre glass walled pool. The new project is also slated to a have a garage for two tenders, a rescue boat, Sea-Doos and a variety of water toys.

“We are thrilled to be part of this project and we will do our upmost to deliver another superyacht that will proudly join the Nobiskrug fleet,” says Rainer Stobrawa, project manager at Nobiskrug.

This is the second yacht project in a row that Imperial has brought to Nobiskrug this year, the first being a 77 metre new build Nobiskrug motor yacht. And it's the third time that the two yachting companies have collaborated on. The first yacht Nobiskrug and Imperial built together was the top secret Nobiskrug superyacht Project 783 delivered in 2012.

The new 62 metre Nobiskrug is scheduled to be completed in spring 2021.