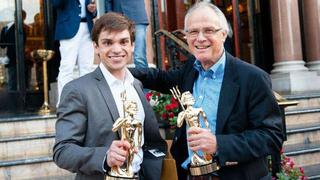 Nominations for the 2014 ShowBoats Design Awards are set to close 11 November, 2013. Don’t miss this opportunity to enter the prestigious superyacht awards.

The fifth annual awards ceremony brings the superyacht industry’s design skills into the spotlight, honouring the talent behind the most exceptional new superyachts 30m-plus to be delivered to its owner between 1 January and 31 October, 2013.

The top craftsmen, designers and innovators of the year are recognised with the coveted golden Neptune awards, which have now become a symbol of pride and distinction for yacht design professionals.

The independent judging panel of experts, comprised of yacht owners, senior yacht crew and acclaimed designers and stylists from within and outside the superyacht sphere, will determine the winners. Awards will then be presented to yacht designers who have the delivered the best sail and motor yacht interior designs, exterior styling, naval architecture, holistic design, and innovative superyacht design solutions. The ShowBoats Design Awards also highlights burgeoning talent in the superyacht industry with the Newcomer of the Year Award and the Young Designer of the Year competition.

In 2014, the ShowBoats Design Awards prize giving and gala evening will take place Monday 24 February at Swarovski Crystal Worlds in Wattens, Austria, coinciding with the first evening of the Superyacht Design Symposium. The two-day Superyacht Design Symposium will have host the top designers in the industry and superyacht owners during a two-day agenda of design-focused debate and discourse, social events and skiing on the slopes of picturesque Kitzbühel, Austria.

Don't miss out on the opportunity to be selected as a ShowBoats Design Awards finalist, submit your nominations today before the 11 November deadline.

Please note that anyone making a nomination must also be in a position to supply the documentation requested in the Rules and Entry Requirements by the deadline of 11 November. Nominations unsupported by this documentation will not be judged.