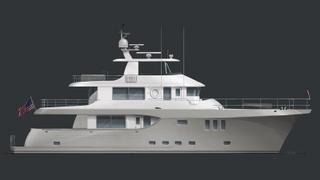 Nordhavn has opened up about the latest addition to its range of compact explorer yachts the Nordhavn 80, which is due to launch in 2019 at the yard's Xiamen facility.

As the first image below shows, this new 24.38 metre all-GRP displacement yacht inherits much of the rugged styling from the yard’s recent Nordhavn 96 launches Lacey Kay and Vivierae.

Accommodation on board the Nordhavn 80 is for up to eight guests split between four cabins including a main-deck owner’s suite. Two doubles and a twin room below decks complete the layout of the guest areas, while the aft crew quarters allows for a staff of two people.

Twin staircases lead up from the bathing platform to the aft deck, which is sheltered by a long upper deck overhang. Here guests can relax around a semi-circular table on built-in seating and three armchairs, while the adjacent electric barbecue allows the crew to whip up a light meal.

The skylounge is another key social area with another sofa, dayhead and a four-person table for games or coffee. Out on deck, the Nordhavn 80 boasts enough space for two Nautica RIB tenders and the option of adding a circular superyacht spa pool with adjacent sunpads.

Other superyacht projects currently under development at the Xiamen-based yard include the fourth and fifth hulls in the Nordhavn 96 series, which are due to launch in 2017 and 2019 respectively.