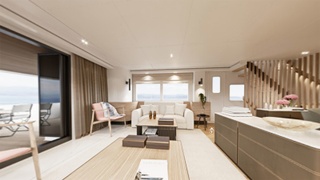 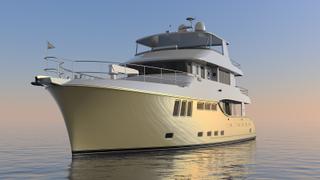 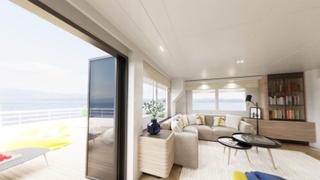 US yard Nordhavn has announced that it is to build a third unit of its 24 metre explorer inspired superyacht, the N80.

Featuring interior design by Dutch design studio Vripack, the model was first announced at the Fort Lauderdale International Boat Show as part of a collaborative partnership between the two companies.

The third unit in the series is due for completion in October 2021.

Speaking about the N80, Nordhavn described the interior as "a simple, yet beautiful, airy and inviting space to relax and enjoy time at sea."

Speaking about the design, Vripack co-creative director Marnix Hoekstra revealed the interior design for the third unit had been specifically “personalised for the owner and the family”.

“The final design consists of American Oak with a white hand-washed finish for the floors and cabinets, this in combination with a silk white finish on the walls and ceiling," he said.

Accommodation on board will be for eight guests in four cabins, including a master suite on the main deck. Other features include enough storage for two tenders, a large swimming platform and an optional Jacuzzi.

In the N80, Nordhavn’s “classic nautical American interiors” have been replaced with Vripack’s “homely Scandinavian chic environment". Open to customisation, the design is punctuated with “accents of daffodil yellow” and “midnight blue hues”, while key materials include “muted woods”.

Vice president of Nordhavn’s Pacific Asian Enterprises division Jim Leishman previously described Vripack as “synonymous with the highest quality and capability”. “It is Nordhavn and Vripack’s mutual intent to offer our clients the most comfortable, safe and luxurious expedition class yachts available.”

Co-owner of the design firm Bart Bouwhuis previously added: “Nordhavn’s DNA embodies a design philosophy that is a perfect match with our own ethos; making owners feel at home at sea, that is why we connect so well.”