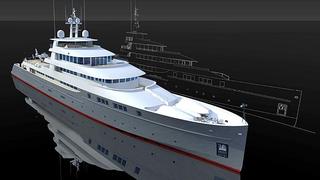 The French yard OCEA has revealed the design of the new flagship in their commuter series, the Commuter 230.

Following the same influences that ensured the success of their previous Commuter series, the historical commuters used in the New York area during the past century, the Commuter 230 is again designed by Joubert-Nivelt. The result is an impressive all-aluminium superyacht of 70 metres.

The interior, designed by François Zuretti, offers large accommodation for 12 guests over four decks. A dedicated owner level is at the top deck, while the usual full-beam area on the main deck is for a large VIP suite. Four further double cabins are on the lower deck and crew quarters are for 26 members.

Few other details are known for the moment, but we note the presence of a large helipad aft of the bridge deck, a main aft deck large pool and the disposal of four tenders (two on the foredeck and two in aft garages).

Following the successful launch of their flagship Elisabet in June 2011, let's wish the same success to the yard based in Les Sables d'Olonne with this new model.