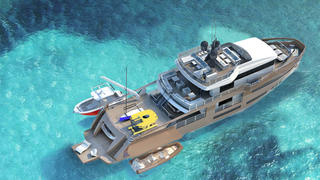 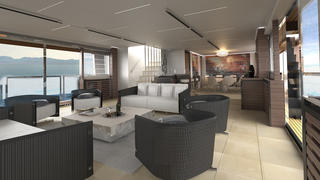 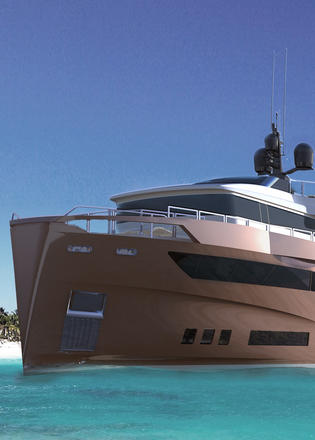 Developed in partnership with naval architect Fulvio de Simoni, this all-aluminium design follows on from the Oceanemo 44 sports utility yacht concept, which was revealed last year.

Ocea Yachts claims that the Oceanemo 33 would be the only yacht in this class with 56 square metres of indoor storage, enough to house an eight-metre day boat, 4.5 metre tender and two Jet Skis.

As if that wasn’t enough, De Simoni has created a raised deck measuring 46 square metres, which can carry a six metre sailing yacht and a 5.8 metre fishing boat.

Despite the multitude of tender storage options, there has been no compromise on interior comfort, Ocea Yachts insists. Accommodation on board the Oceanemo 33 is for ten guests, split across a master suite, two VIP cabins and two twin rooms, while the crew quarters allow for a staff of up to five. Other key features include an external bar and a grand total of 100 square metres of exterior relaxation space.

Take a closer look at the Oceanemo 33 explorer yacht concept

Power comes from a pair of 475hp CAT C18 engines for a top speed of 13 knots and a maximum cruising range of 4,000 nautical miles at ten knots thanks to the Oceanemo 33’s total fuel capacity of 33,000 litres. A diesel electric powertrain will be offered as an alternative.

Visitors to next week’s Cannes Yachting Festival (September 6-11) can take a closer look at the Oceanemo 33, as the explorer yacht concept will be on display throughout the show.