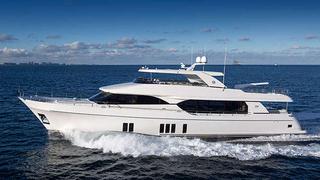 Ocean Alexander has delivered its Ocean Alexander 100 Motoryacht. The builder reported this news as well as the sales stats for Alexander Marine International, the importer of Ocean Alexander Yachts, which rounded out 2014 with four new yachts sold prior to the end of the year.

The Ocean Alexander 100 megayacht made her world debut at the Fort Lauderdale boat show this past October, and the 30.53-metre superyacht was sold and delivered to her owners – who previously owned a Ferretti 85 – just before New Year's Eve. The owners plan to use the yacht cruising along the East Coast of the US and possibly travel over to the Mediterranean as well.

The owners were drawn to Ocean Alexander due to its contemporary look and feel. Ocean Alexander says that numerous vendors and technicians worked diligently to complete the yacht to the buyer's brief and requirements. Designed by Evan K Marshall, the OA 100 is a natural progression from the OA 90, yet she takes after the superyacht stylings and proportions of the Ocean Alexander 120, also designed by Marshall, which was built in cooperation between Ocean Alexander and Christensen.

A new Ocean Alexander 85 Motoryacht, with updated design features and also styled by Marshall, was sold at the end of 2014. The owners are current Ocean Alexander clients who are stepping up from an OA 80 Motoryacht and who plan to use their new yacht cruising the waters of Mexico and US West Coast.