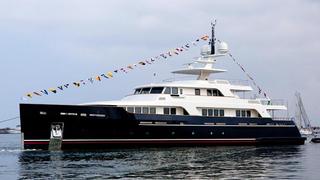 Michael White of Ocean Independence tells me he is delighted to announce the sale of the Codecasa 42 Vintage Series, hull F73.

Launched in June 2011, the Codecasa F73 is the first hull of Codecasa's new Vintage series.

Lloyd's registered and MCA compliant, the first Codecasa Vintage has a length of 42.50m. She's built in steel and aluminium to a design by Franco & Anna Della Role, taking her inspiration from classic and traditional glories of the past. Her beautiful sleek silhouette is reinforced by the fact that there is no full-beam section on the main deck and the presence of a vertical bow.

The interior, dominated by light colours, accommodates 10 guests in a master, two double and two twin cabins. On the technical side, this Codecasa is powered by twin 1,650hp Caterpillar engines giving a top speed of 17 knots and a range of 4,000 nautical miles at the economical speed of 11 knots. The vessel will be named Magari.