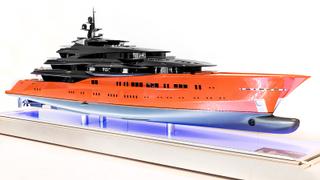 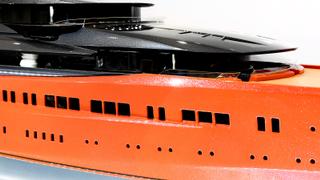 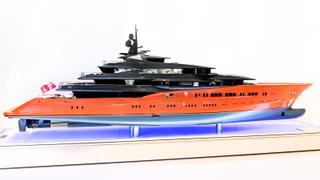 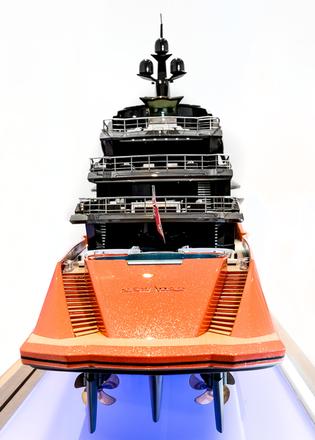 Designed by Adriel Rollins in 2011, this PYC-compliant yacht concept was given a spectacular Sun King finish, which used real diamonds to create a shimmering, luminescent effect.

The patent-pending Sun King process was created by Jean Boulle Luxury, which is working with partners AkzoNobel to roll out into the world of automobiles, airplanes and yachts.

Bertrand Boulle, CEO of Jean Boulle Luxury, said: “Sun King Diamond Coating has a number of potential superyacht applications and its qualities are unmatched by any other product on the market”.

Oceanco chose Project Lumen to be given this special scale model treatment due to its focus on light, with extensive use of reflective metals, LEDs and transparent materials, including a tubular glass elevator and floating superyacht staircase.

Accommodation is for up to 36 guests and the design allows for a flush foredeck superyacht helipad, a sundeck Jacuzzi and a large spa pool on the aft deck. Rollins added: “I wanted the exterior styling to work in tandem with the hull form, instead of appearing to be stacked upon the hull.”

Other superyacht projects currently under development at the Dutch yard include the 109 metre Oceanco Y718, which is due to launch next year.