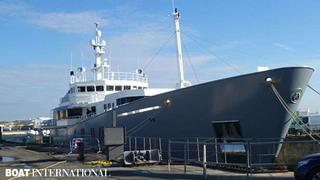 Boat International has revisited the 71m superyacht Enigma XK at the Atlantic Refit Center at La Rochelle, France, just weeks before the expected completion of the conversion project.

Norna, a Scottish Fisheries Protection Agency vessel built in 1988, formed the basis of Enigma XK, which will be launched as a luxurious explorer yacht. Philippe Briand designed the exterior of the conversion and Veerle Battiau, director of his studio’s motor yacht division Vitruvius, penned the interior. The conversion project is taking place at the Atlantic Refit Center at La Rochelle, where finishing touches are being made and sea trials carried out.

‘On her first trial she was going at sixteen to seventeen knots – not full speed yet – and we had two metres of swell more or less going out of the Île de Ré area,’ says Captain Iltud Orio. ‘We made some vibration tests, and so far the guest cabins and owner’s suite are very silent, despite the fact that we kept the old engines.’

Captain Orio puts this down to a number of anti-vibration measures introduced during the project. ‘We added some pillars and bulwarks, especially in the centre of the vessel, to spread the vibration, and we had a change of exhaust system – much bigger than the original one,’ he says. ‘Then for the guest areas, the entire (main) deck has been covered with an elastomer, which reduces vibration, plus all the walls of the cabins are mounted, so the superstructure around the cabin absorbs all the shocks and vibration.’

The upper deck master cabin is a light, bright space, with wraparound windows forward and a huge skylight above the bed. Aft, the en suite features a grand bath, two sinks, hammam and open shower, while further back still is an office. The most impressive space aboard is the upper deck saloon – or ‘diamond’ as the designers call it – with wraparound windows, which was built from scratch.

Both the exterior and interior designs preserve much of the character or the original ship. Norna’s funnels have been retained and made into a feature, the round brass portholes have been kept in the gym and the starboard door into the main deck lobby is original. The interior design has been planned to both retain a nautical style and get as much light as possible into a boat that was not originally designed for leisure. Therefore, for example, the main saloon features long windows that resemble a traditional round port, but stretched to nearly full height to maximise daylight.

The interior design and décor makes the most of the natural light. Rich, dark woods in the main saloon and main deck guest cabins are traditional looking, but their high-gloss carries light throughout the spaces. Panelling in the corridor and furniture in cabins is under-lit, while touches of mirror and mirror-polished stainless steel abound. There are also interior windows from the main saloon into the guest corridor and the VIP cabin into its bathroom, to facilitate the transfer of light.

The full feature on Enigma XK will be published in a future issue of Boat International magazine.