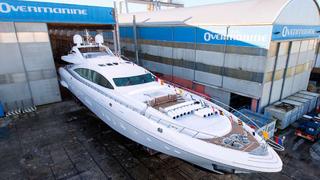 The Overmarine Group has welcomed hull No 8 of its flagship Maxi Open Mangusta superyacht with the launch of the latest Mangusta 165 E in Viareggio, Italy.

Introduced in 2007, the model has proved a popular one for the Italian superyacht builder with eight of the high-performance yachts already on the water and the ninth soon to follow. The seventh Mangusta 165, Misunderstood, was launched in 2012. Hull No 8 of the 50m composite maxi open yacht is predicted to reach top speeds of 40 knots.

With the E in her Mangusta 165 E name standing for 'Evolution', the latest yacht in the series benefits from new design features and innovation. Meeting the owner's brief, the shipyard has integrated new side windows into the new Mangusta 165 E megayacht. This large, single pane of glass in the main saloon provides amazing vistas and allows natural light to flood in. The flybridge has also been updated, with the superstructure redesigned in order to host a large U-shaped divan. This styling choice was also made to give the yacht moder modern, aggressive exterior lines.

On board comfort has been improved with further attention to soundproofing, vibration control and ergonomic layouts. The Mangusta 165 E's interior features continuity with interior elements between her main salon and guest areas as well as externally. She features more than 10 different kinds of woods and lacquering, seven types of marble, leather and mother of pearl.

The new yacht will soon be delivered to her owner in an official ceremony, and she will make her world premiere at the Monaco Yacht Show in September.