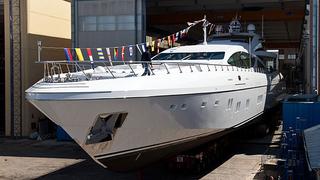 The morning of Friday 30th March 2012 saw the Overmarine Group launch the 7th hull of the 50m Mangusta 165 series.

She is the fastest maxi open yacht of her size in the world and will be delivered soon to her owner for a cruise in the Mediterranean. In September she will be shipped to the USA in time to be displayed at the next Fort Lauderdale Boat Show.

The Mangusta 165 has a four stateroom layout with a master suite, VIP stateroom and two guest cabins. The rest of her interior is dedicated to relaxation and entertaining areas. In addition, she has a large flybridge with a second helm station and dining and sunbed areas.

The 7th Mangusta 165 will join the series fleet, which includes: