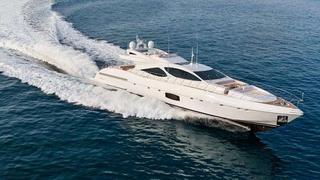 Overmarine chose the Miami Yacht & Brokerage Show for the worldwide debut of its newest model, the Mangusta 110 superyacht.

Notably, it was the first time that the Italian builder unveiled a new model outside of Europe.'The fact that we decided to bring this yacht to Miami first shows how important the US market is to Overmarine,' says Isabella Picco, Overmarine’s Chief Communication Officer.

Launched in November 2013, the first 33.8m Mangusta 110 was built on spec, and the shipyard decided to ship the yacht to Miami to showcase her to the American market first. Within hours of the yacht’s arrival to the United States, a contract was signed, although not with American owners. 'Miami brought us good luck,' Picco said.

The 13 February launch party for the newest Mangusta was no time for speeches. 'This is just a party,' Overmarine CEO Maurizio Balducci said. 'The yacht speaks for itself.'

Based on the popular Mangusta 108 but updated with the latest features to grace the newest models within the Mangusta line, the new Mangusta 110 boasts a nicely sized sun deck and a foredeck lounge, both well integrated into her stylish design by Stefano Righini, an Italian designer who has long been associated with Mangusta. Working closely with Overmarine’s in-house design team, he was able to update the design and integrate new features without losing the style that makes a Mangusta immediately recognizable.

This particular redesign focused primarily on the superstructure. It was modified to make space for a spacious foredeck lounge with banquette, adjustable tables and a huge sunpad. The superstructure also now accommodates a flybridge, which features ample seating, a table and an optional outdoor helm station.

The addition of the flybridge meant that Overmarine had to give up the sliding roof that opened up over the main deck on the Mangusta 108. Instead, four skylights are located over the dining area, located just behind the three leather seats facing a high-tech helm console. They bring plenty of light into the main deck, which is mostly dedicated to a comfortable salon with ample seating.

The lower deck accommodates four staterooms able to sleep nine people comfortably. The owner’s suite, located amidships, offers great views through newly designed portholes. It encompasses a nicely sized bedroom with king size bed, vanity and a love seat, a walk-in wardrobe and a nicely appointed bathroom with dual sinks and a shower. The VIP, located aft, has a nice size and a walk-around bed. Throughout the lower deck, the overhead room is generous.

This crew area is accessed through a discreet door and a private stairwell near the salon’s aft doors. The stairs, concealed through a sliding door, lead to a small but convenient lounge area, three cabins, a glass-enclosed galley and the engine room.

The latter is one of the yacht’s highlights because this beauty is also a beast. Thanks to powerful MTU engines (M94 in the 2000 series) with a combined 5,200 horsepower and Kamewa water jets, the Mangusta 110 is able to reach a top speed of 35 knots. Being conservative in nature, the shipyard states the top speed as 33 knots. A Seakeeper gyro stabilizer and advanced soundproofing increase the comfort at any speed.