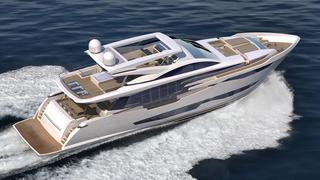 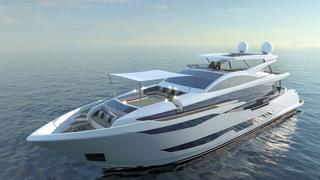 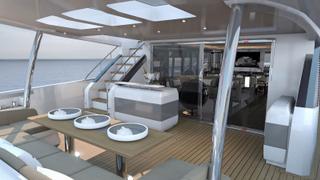 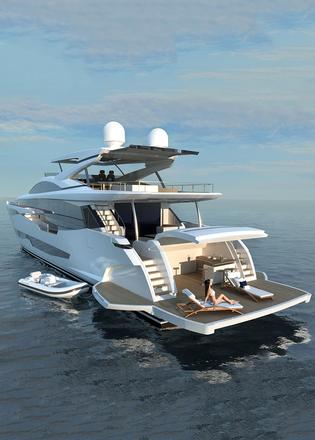 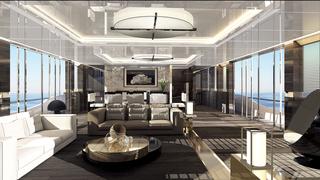 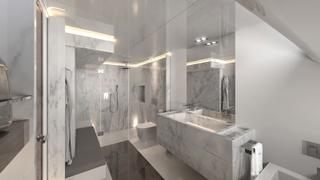 Pearl Yachts has marked its entry into the superyacht market after launching its semi-custom flagship model, the Pearl 95. The 29 metre model is a step up from the yard's previous flagship, the Pearl 80, and will be the largest vessel to be built by the British yacht builder to date. The model's launch comes ahead of its world premiere at the Cannes Yachting Festival.

As with the successful Pearl 65 and 75 models, Pearl Yachts collaborated with Dixon Yacht Design on the exterior design, and with Dragons Den star Kelly Hoppen on the interior design. The pairing continues a long running collaboration between Hoppen and yacht designer Bill Dixon.

Pearl Yachts, which is preparing to celebrate its 20th anniversary, has described the new model as in-keeping with the style of the yard’s smaller yachts but “even more luxurious and breath-taking.” “The Pearl 95 offers everything the Pearl client has come to love but on a considerably larger scale,” the company said.

Efforts have been made to retain the seakeeping and manoeuvrability of Pearl 95’s smaller sister yachts. The interior has been described as aerodynamic with glazing illuminating the interior in order to add to its sense of spaciousness.

One of the most notable design features is the transom set up. A transom and Jet Ski hatch opens up to reveal the tender garage and when the tender has been launched this space doubles up as a beach club. With sun loungers and a bar this is the ideal spot for guests to relax or enjoy the water.

Bill Dixon’s design also includes an area forward dubbed as the ‘foredeck sun lounge’, which has areas for relaxing and sunbathing, while additional folding buttresses on the aft-quarters add more deck space, and offer a good spot to go for a swim or to board the tender.

The main saloon features floor to ceiling side doors, which slide open to connect the open plan lounge with the outside. It is also spacious enough to accommodate an L-shaped sofa while the dining table seats eight.

The Pearl 95 is designed with four or five guest cabins to accommodate up to 10 guests. On the main deck the full beam owner’s cabin has its own forward facing panoramic views. There are a further four guest ensuite cabins on the lower deck comprised of two double and two twins. However, owners may opt instead for a full beam VIP cabin with a walk-in wardrobe and large bathroom in place of the two double cabins. Crew quarters are for up to five and include an additional captain’s cabin towards the bow.

A large area aft of the saloon on the main deck has been created for dining while a curved door leads forward to the pilot house. This features a glass bridge with integrated navigation and vessel control systems.

Power will come from a pair of 2400hp MTU 16V M96 engines for a top speed of 28 knots and maximum cruising range of 380 nautical miles. However, the semi-custom yacht has various engine options with Caterpillar C32 1925hp and MTU 16V M96L 2600hp engines also available.