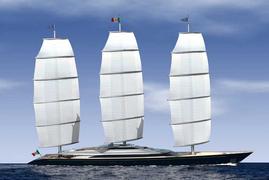 Perini Navi has announced a 102m successor to the very successful 88m sailing yacht Maltese Falcon, at present only a concept, but keenly looking for a buyer.

The Falcon Rig is a revolutionary sail system based on self standing, rotating masts and multiple square sails held by yards which are curved to a 12% camber. The sails are set between the yards in such a way that when deployed there are no gaps to the sail plan, enabling each spar’s sail plan to work as a single sail. Since 2006, when the Maltese Falcon was launched, the system has been astonishingly successful, having sailed over 80,000 miles.

The sail plan has been reconfigured and the three carbon masts are slightly taller than the ones on the 88m. Yet they have still been designed to allow for passage through the Panama Canal. The distance between the spars is also increased, to optimise the efficiency of the system, with its 3,000 square metres of sail area. The hull has also been redesigned, with a sleek look and long waterlines.