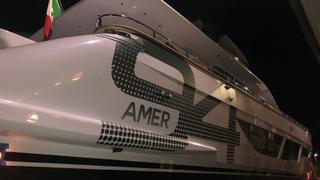 Italian yard Permare has launched the fourth hull in its Amer 94 series.

The 28.65 metre all GRP fast-planing yacht was launched from the yard's Viareggio facility this month. The interior design comes from the books of Stefano Tini.

The yard revealed the yacht, which will attend the Cannes and Genoa yacht shows, features a green colour scheme, inside and out.

The yacht can accommodate eight guests across four cabins, including a full beam master. The crew quarters meanwhile accommodate a staff of three.

Key features include a plethora of exterior relaxation options, such as the superyacht sundeck with its retractable Bimini, and the foredeck seating area, which provides additional privacy when moored stern to.

Other key features of this system include joystick control for more precise manoeuvring and a dynamic positioning system, which allows the yacht to stay in a given spot without dropping anchor — ideal for superyacht owners who wish to visit environmentally sensitive areas.

Despite this new option, Permare is still keen to point out that its more powerful triple IPS 900 set-up is available to order. Hull number three in the series, Drifter was launched last year, and used this engine set-up to achieve a top speed of 29 knots on her sea trials.

It comes after the yard launched its 3rd Amer Cento yacht Duchessa earlier this month. The 29.6 metre yacht is set to attend the Genoa International Boat Show in September.