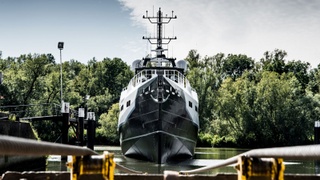 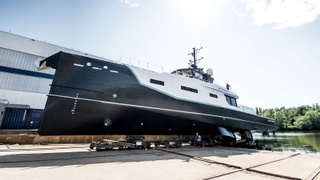 The 45 metre Damen support vessel Pink Shadow has been delivered as the shadow vessel to the 53.9 metre Baltic sailing yacht Pink Gin IV.

Following the sale of Pink Shadow, the yacht support vessel underwent owner modifications at the Rybovich yard in Fort Lauderdale, including striking custom art work on her hull.

Following delivery, Pink Shadow travelled 11,000 miles to host an owner's event in South America. The duo will now travel to St Barths where Pink Gin will take part in the St Barths Bucket Regatta from March 19 -22.

The 45 metre steel-hulled, semi-displacement yacht has a beam of 8.3 metres and 120 square metres of deck space.

Built with an aluminium superstructure, the exterior and interior design was handled by Damen’s in-house design team.

The support vessel is “a blend of superyacht support and stand-alone functionality”, according to the yard, and offers accommodation for six guests across three double guest cabins, with a crew of seven.

Other key features include a touch-and-go helipad, zero-speed stabilisers, and deck crane for tenders and toys weighing up to 6.7 tonnes.

Power comes from a pair of Caterpillar C32 TTA engines for a top speed of 16.5 knots and range of 5,000 nautical miles at 12 knots.