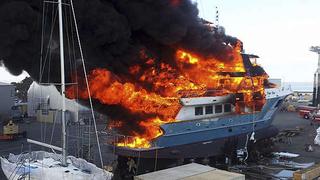 Polar Bear shot by police and destroyed by fire

The 31m explorer yacht Polar Bear, launched by Citadel Yachts in 2011, has been destroyed by fire while dry-docked in San Diego.

The blaze began around 9.15am and fire-fighters doused the 31m yacht with water, but with little initial success. According to eye-witnesses Police opened fire on the yacht with high-powered rifles to blow out the windows so the water could be more effective.

Fire investigators' initial assessment is that the fire was probably started by welding work. There were believed to be 3000 gallons of fuel on board and as of Thursday night the burned-out yacht was still smouldering.

Built for an experienced yachtman, Polar Bear was built in steel and aluminium for long range cruising. The interior layout accommodated 10 guests and there were crew quarters for four members. She was powered by twin 685hp Caterpillar C-18B engines giving a top speed of 12.5 knots, and cruising speed of 10 knots and a range in excess of 5,000 nautical miles.