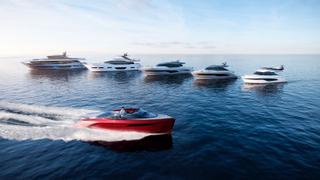 Princess Yachts has announced it is to launch six new models over the next year after posting a record set of half year results.

The new models will follow on from the five models already launched this year, the S78, V50, V60, V65 and F70, and will feature new technologies and concepts developed by the Plymouth based yard.

The X95 ‘Super Flybridge’ will be the first model of Princess’ all new X Class and will “rewrite the rules for flybridge yachts”, according to the company. While details remain sparse, the X95 will feature a flybridge and main deck arrangement spanning almost the full length of the yacht. Featuring “unprecedented space”, the X class will be aimed at customers wanting to spend more time cruising.

Princess also revealed a new F45 flybridge model, which will “establish itself as the Princess of small flybridge yachts”, and the Y85 motor yacht, which will “herald a new era for the Y Class range.”

It has also extended its V Class sports range to include both the V55 and the 37-knot V78, which will become the flagship upon its launch.

Princess Yachts executive chairman Antony Sheriff said the new models will “raise the bar much higher with unprecedented use of innovative technologies, materials, architectural concepts and design solutions. We hope to be setting the standard for yacht producers for many years to come”.

It comes as Princess reported record revenue growth for the first half of the year, with a 50% year on year increase. With an order book that covers 100% of 2018 production and 75% of 2019 production, the company has increased its workforce by 700 people since January and predicts its total workforce to hit 3,000 employees in the next 12 months, a record number.

The company also revealed it has increased production volume by 30% and is on target to produce 300 yachts this year, resulting in record profitability.