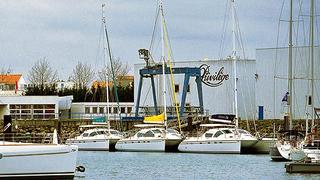 Following the liquidation of French shipyard Alliaura Marine on 27 March, the company's assets were auctioned off in early June.

French industrialist Gilles Wagner, with the support of private investors, bought the Privilège and Feeling brands along with the moulds and production tools. Only the first hull of the 30 metre maxi catamaran Privilège 1000, the largest model ever built by the shipyard, has not been sold and is currently lying in Lanester, Brittany. The future of this beautiful project designed by Marc Lombard remains uncertain for the moment. The rest of the production is returning to Les Sables d'Olonne in Vendée, the birthplace of this company created in 1985 by Philippe Jeantot.

Catherine Relandeau will take over as commercial director. She is no stranger to the industry, and in fact started out at Privilège Jeantot Marine and remained there for 20 years until her departure in 2009. She is enthusiastic and optimistic about this new challenge: 'We hired former employees of Alliaura Marine who had not made the move when the shipyard was transferred to Lanester in 2008. They know the brand and are attached to it. All of this is very motivating. We hope to find our rhythm within a year'.

For the time being, only the Marc Lombard-designed Privilège catamarans between 44' to 75' will be relaunched with the reintroduction of the Feeling range of monohulls delayed until the market situation changes for the better. As a first step, all equipment and moulds will be transferred to Les Sables d'Olonne, before the catamaran production commences.

Privilège Marine has announced that it will be at the Festival de la Plaisance of Cannes this September.