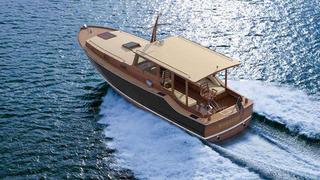 A modern replica of the "most famous fishing boat of all time" is progressing smoothly, the yard behind the project says.

US design house Bill Prince Yacht Design, based on Lake Michigan, is developing a production replica of Ernest Hemingway's fishing boat Pilar and says a milestone has been passed with the completion of the engineering phase of the project. Dozens of drawings have been developed which cover mechanical, plumbing, electrical and all manner of state-of-the-art systems designs.

Bill Prince Yacht Design said, "They say Ernest Hemingway caught his first fish at three, and never got over it. When he was ready to order his first and only fishing yacht at the age of 35, he trusted only Wheeler Shipyards to build it.

"Hemingway’s Pilar not only out-fished and out-performed all of the other fishing yachts of the time, but in the 30 years Hemingway owned her, she survived four hurricanes by riding them out at sea. It was testament to the ship’s strength and the captain’s courage. Now the most famous fishing boat of all time is coming back to life. You can own her and be a part of history.

"This famous boat and its legacy have inspired the Wheeler yard to introduce an exact copy of the original Wheeler Playmate which Hemingway loved so much. It will have the classic look of the original, but will conform to today’s ABS and US Coast Guard standards with modern equipment."

Hemingway was a hugely keen sport fisherman and his skills afloat led to him being inducted into the International Game Fish Association Hall of Fame. As a boat owner, he was an early adopter of outriggers and the flybridge.

The author paid $7,455 for the 39-foot Pilar in 1934 and the original purchase order which he signed still exists. The boat sleeps four to six and has a 23-knot top speed with twin Cummins 7.6 litre QSB diesel engines. Bill Prince Yacht Design said, "It is now possible to own a piece of history and to see first hand why Papa loved his boat so much."

The Wheeler marque has been in existence since 1910, since when the family yard has built more than 3,200 pleasure boats and more than 800 military craft.