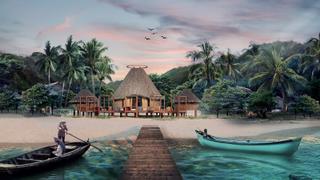 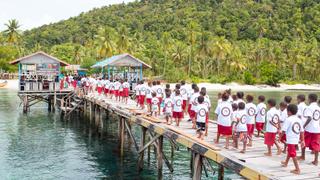 Progress is well underway on plans to build a learning centre for a remote Indonesian community in a project spearheaded by the owner of the 51 metre Phinisi-style superyacht Dunia Baru.

Construction on the learning centre, which will service the village of Sauwandarek on the island of Mansuar, is set to get underway later this month.

Owner Mark Robba, along with other members of the project team, recently met with Sauwandarek’s chief Baba to finalise plans for the centre.

The site has now been mapped out while indigenous wood has been responsibly sourced in preparation for the build.

"It was important that we took the time to agree on the perfect location for the learning centre with the chief and village elders,” Robba said. “This is going to be a space where people can come together in learning and community. It needed to feel natural."

The 20 metre by 12 metre centre will be constructed from wood sourced from an island called Batana, 15 miles away from Mansuar.

A total of 12 trees, or 25 cubic metres, of merbau wood will be needed to complete the build which will be undertaken by local builders assisted by three of the original shipwrights who worked on Dunia Baru’s build.

Robba added: “An entire village – about 22 families – on Batanta specifically work to responsibly select and harvest the island's timber. Once the wood is prepared, it will be brought by small boat across the Dampier Straits back to Sauwandarek, ready for construction to start.”

It is hoped that the learning centre, which has been designed by architect Popo Danes, will resemble traditional architecture and natural surroundings.

Set to open in March 2019, the centre will contain a well-stocked library and multi-use meeting and teaching space. Its focus will be on preserving the unique local habitats and skills such as cooking and tourism.

Sauwandarek’s chief Baba, who has lived in the village since 1991, said: “The learning centre will really help my community. I want Sauwandarek to be known as a village at the forefront of tourism in Indonesia, helping to make a positive impact, so travellers share their stories of Raja Ampat and Indonesia with the world.”

Robba is also set to open a regional operational hub for Dunia Baru on the island of Waisai in 2020.

The yacht has become known for its philanthropic acts in the region. In September, Dunia Barudelivered vital supplied to Lombok's earthquake survivors.