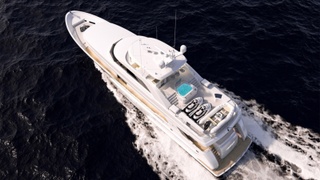 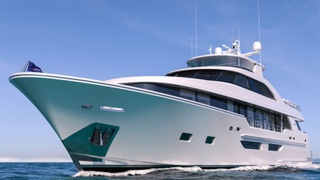 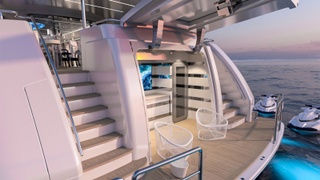 American builder Westport has revealed more details and renderings of its 35.76 metre superyacht, the Westport 117.

The raised pilothouse design features a GRP hull and superstructure, and will feature a traditional superyacht layout.

This will see the main deck formal dining area for eight lead into the main deck saloon which, thanks to the 7.67 metre beam, is described as “dramatically open and spacious” by the yard.

The saloon leads into the galley while the owner’s suite sits forward of the main deck accompanied by a spacious ensuite.

Total guest accommodation is for a total of eight guests in four staterooms, including a VIP stateroom and two doubles port and starboard of the lower deck. Crew accommodation comprises two staterooms aft, each with private ensuite facilities, and a double captain’s cabin.

Both the exterior and interior design has been developed inhouse, with the owner able to customise the décor. Interior woods include mahogany with pomelle sapele and beech hardwoods in the crew’s quarters.

Elsewhere, the yacht will feature a hot tub on the flybridge, which also features settees and a BBQ.

Power will come from a pair of Caterpillar C32-ACERT rated 1900hp engines for a top speed of 24 knots and cruising speed of 20 knots.