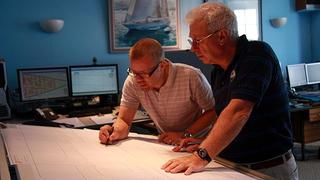 It's the end of an era as Ron Holland hands over his studio and staff to his lead designer, Rob Doyle, to form Rob Doyle Design.

Doyle worked as Holland’s lead designer for 18 years during which time the studio was responsible for a range of revolutionary superyacht projects including M5 (ex-Mirabella V), the world’s largest sloop.

Says Ron,‘It is natural for Rob to want to push forward with his own design career and projects. I have moved my centre of activity to Vancouver, Canada and this changes the way I work.’

'To have had the opportunity to work with Ron Holland over the past 18 years has been both a rare privilege and an eye opener as to what is possible,' comments Rob Doyle.