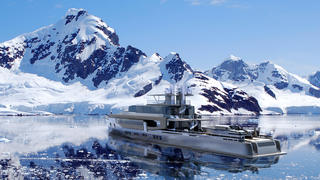 Rossinavi teams up with Ken Freivokh for explorer yacht Argo

Italian yard Rossinavi and designer Ken Freivokh have teamed up for their first project together — an aluminium explorer yacht called Argo, which was announced today (September 29) at the Monaco Yacht Show.

Measuring 48 metres LOA, Argo will feature a fast displacement hull and a total interior volume of just under 500 gross tonnes. Scandinavian Marine has been appointed as the project management company for Argo.

This go-anywhere superyacht is equally well suited to serve as a support vessel for much larger yachts, thanks to her extensive tender storage. A custom-designed crane can launch two tenders, as well as a personal submarine and an amphibious landing craft. To further enhance her explorer yacht credentials, the aft-deck of Argo features a touch-and-go helicopter deck.

Freivokh explained: “Argo has been designed as a proper exploration and support yacht, with purposeful styling targeted at functionality and operational considerations.”

Accommodation on board is for 12 guests, including a raised owner’s deck with a full-beam master cabin and a guest double that can be used as a VIP suite, captain’s quarters or nanny cabin. From here, a spiral superyacht staircase leads up to the glass-sided crow’s nest, which boasts 360-degree views out to sea.

Discreet crew access means that staff can move from the storage areas right up to the bridge without having to disturb the guests. Power comes from a pair of Rolls-Royce pod-drive engines for added manoeuvrability, while gyroscopic stabilisers will ensure a smooth cruising experience. Rossinavi adds that Argo will have a maximum cruising range of more than 5,000 nautical miles.

Other superyacht projects currently under development at the Italian yard include the 63 metre Rossinavi FR031, which is due to launch next year.