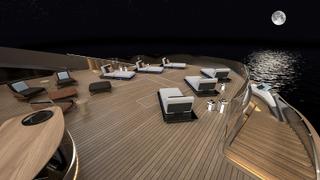 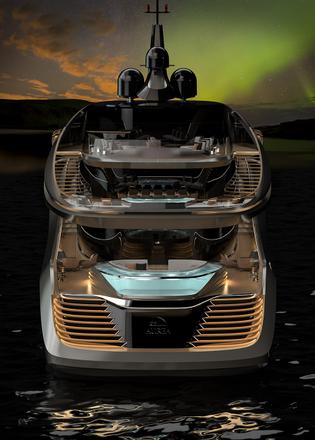 Rossinavi teams up with Pininfarina for Aurea concept

Key features include a flowing superstructure that draws inspiration from the sea. Meanwhile, the diesel electric powerplant is situated amidships, freeing up more space for a huge superyacht beach club back aft.

On-deck relaxation options are plentiful on board Aurea with three large aft decks, two swimming pools and fold-out balconies to port and starboard that provide easy access for those looking to take a dip.

A pair of sculptured staircases lead up from the boarding platform to the main deck, where guests can relax in a private wrap of seating or take a dip in the C-shaped swimming pool.

The upper deck is equally spectacular, with an infinity pool, al fresco dining for 12 people and two curved staircases that lead up to the sundeck and superyacht helipad, which is large enough to accommodate six sunloungers. Moving forward, an enclosed skylounge provides shelter for those looking to escape the sun’s harsh rays.

Take a closer look at the Rossinavi/Pininfarina collaboration Aurea

Further details are being kept under wraps for now, with the total accommodation capacity and estimated performance figures undisclosed. However, this provocative design hints at an exciting new partnership between the Viareggio-based yard and the world-famous studio that has styled more than 100 Ferraris.

Other superyacht projects currently under development at Rossinavi include the 48.5 metre N2H, the 49 metre Aurora and the 49.9 metre Endeavour II, all of which are due for delivery this summer.