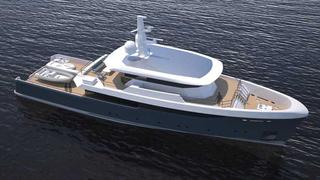 Pieter Van Geest has spoken to us about his 32m Global Explorer concept, simplified to reduce expenses from repair stops and large crews on long journeys.

‘The idea is if you stand on the boat you have superyacht quality, but for example if you go to Norway – they don’t really have marinas there, they have fishing ports – you can go into port without getting too worried that you’ll scratch your lovely jewel,’ says Van Geest, of Van Geest Design. ‘Simplicity is number one in this design – simplicity and sturdiness.’

These two intertwined aims are particularly apparent in the mechanics of the yacht (which will have a range of 5,000nm at 10 knots).

‘If you want to put a valve on an axel, if you buy it as a yacht it’s almost double the price as the valve for a commercial ship,’ says Van Geest. ‘So the idea is with this you build it almost like a commercial ship with commercial ports, which are less fancy and they maybe don’t look as highly polished, but they definitely have a longer lifespan and they’re proven on the commercial vessels.

Similarly, Van Geest would remove all unnecessary systems from the technical design of the boat, installing simple, proven technology to reduce the likelihood that a expedition would have to be delayed while an obscure part is called in – as well as solar panels on top of the bridge deck, whose power will be integrated into the management of the vessel.

This approach, also taken with the engines, also makes life easier for crew. ‘You don’t need twin 2,000hp engines on a boat like this, you can do with a lot less, this one has twin 500hp.’ says Van Geest. ‘They’re just smaller. There is less to maintain, it makes walking around them a lot easier and gives you more space in the engine room to maintain other parts of it.’

Outside, the yacht’s defined lines, with ‘no excessive design’ are intended to ease building and maintenance of the exterior. The hull will be painted in marine paint used on commercial ships to allow easy repairs and will therefore make it easier to moor in commercial or smaller fishing ports while exploring the globe.

Likewise, the deck will be covered with a synthetic shock absorbent surface, allowing tenders and toys to be stored on the aft deck for launch by crane.

The superstructure inside the bulwarks and everything that can be touched will be painted smooth with a superyacht quality paint.

Apart from easing maintenance to reduce the number of crew necessary, the interior design is set up so that many aspects of the yacht's operation could be carried out by owners, with for example a galley designed for use by guests.

So what has the reaction so far been from the superyacht industry?

‘The initial reaction from some people is that this could be the ultimate support vessel for high profile sailing yacht races,’ says Van Geest. ‘These sailing boats don’t have the capacity to sleep the racing crew so they can sleep on this vessel and the sails can be stored on the sailing boats.’