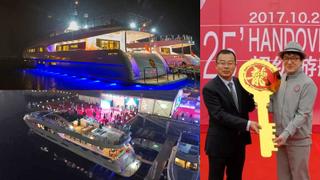 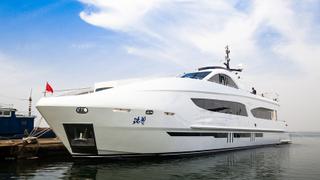 The handover ceremony took place in the city of Huludao last month (October 27) in which Chan was presented with a giant golden key as a symbol of his ownership before smashing a bottle on the bow.

He later took the helm as the Ruiying 125 headed out of Anchor Bay Marina with a delegation of city leaders, bank officials and cultural representatives on board.

Chan’s yacht is the second Ruiying 125 to be launched in the past three months, with the first hull in this all-GRP series hitting the water back in early September.

The layout of the yacht is unclear, but pictures released by the Chinese yard show off her key features, including a helideck, Jacuzzi, sauna and (as you might expect from the star of Shanghai Knights and Kung Fu Yoga) a superyacht gym. The contemporary décor includes white worktops, dark sofas and extensive wooden panelling.

Power comes from a pair of 1,900hp Caterpillar C32 ACERT diesel engines that propel the Ruiying 125 to a top speed of 23 knots. Vital statistics include a 7.32 metre beam and a maximum draught of 1.9 metres.

In a press conference, the yard revealed that Chan has plans to own an even larger yacht, with a 46 metre Jinglong yacht due to be launched next year.