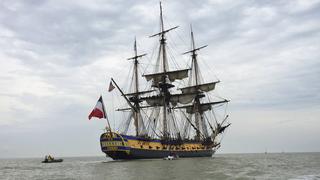 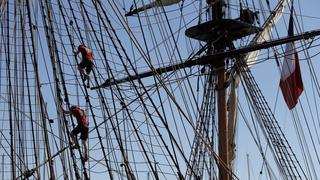 The original Hermione was the fastest ship in her day, sent across the Atlantic to tell the American colonists that France would be sending support in the American Revolutionary War against the British.

The replica has been built to meet the original plans almost exactly. The only updates are stainless steel bolts in the hull for added strength, and the addition of modern day running toilets and showers.

What’s staggering about Hermione is the numbers involved in this build – the cost, manpower and sheer measurements involved in re-creating a yacht of this size and scope.

*Here are some of the most amazing facts about the replica of Hermione: *

€26 million – the amount of money that had to be raised to build the Hermione. It took 17 years to raise the funds to build the classic replica.

2,000 – the number of oak trees harvested to build her hull

56m – the height of the yacht’s three masts

80 – the number of crew, most of whom are volunteers

56 – Dr. Henry Kissinger, the 56th United States’ Secretary of the State, is the honorary chairman of the enthusiastic Friends of the Hermione board of directors

200 – the number of different ropes on the yacht, which the crew says is difficult to memorise even after a year of training

18th century – the era the maze-like rigging is styled after, and also the style of costume that some crew members have chosen to wear, such as Adam Hodges-LeClaire, pictured below, who has donned even woolen socks and leather buckle shoes

64.9 – the length in metres of the replicated yacht

19 – the age of Lafyette when he left

5,000 – the amount of troops that Lafyette promised the Americans upon arrive

12 – the number of towns on the Eastern seaboard of the US that Hermione will visit after her predicted landfall on June 5. She will be offering tours and educational opportunities – capped by a parade in NYC harbour – before retuning to France.

The goal behind the replica creation is education and to celebrate history, but also to, “To symbolise and rekindle through the Hermione the intimate ties between France and the United States, and the spirit of liberty that sustains them.”