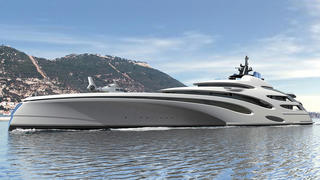 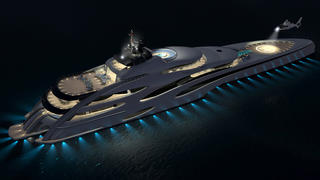 Designer Sam Sorgiovanni has teamed up with Echo Yachts and One2three naval architects to create a 120 metre trimaran concept.

This cutting-edge superyacht design aims to make the most of the interior space offered by the trimaran’s broad 20 metre beam.

The 120 metre trimaran would feature exterior and interior dining areas, both of which could seat all 26 guests at once. Two helicopter decks allow guests to arrive in style, with a touch-and-go helipad on the foredeck and a second helipad on the sundeck. Communal entertaining spaces include an indoor cinema, swimming pool with counter-flow current, Jacuzzi, gym and spa.

Tender storage is provided in the foredeck, with access via two gull-wing style doors, while the crew quarters allow for a staff of up to 40. Echo Yachts adds that the generators would be placed in the outer hulls to reduce the noise and vibration levels on-board.

Propulsion options include a hybrid diesel electric version, and zero-speed stabilisers further add to the feeling of comfort and luxury on board. This 120 metre trimaran concept is design to achieve a top speed of 20 knots and a maximum cruising range of around 5,000 nautical miles.

Other projects currently under development at Echo Yachts include the 84 metre White Rabbit trimaran, which will be one of the world's largest aluminium superyachts when it is launched in 2018.