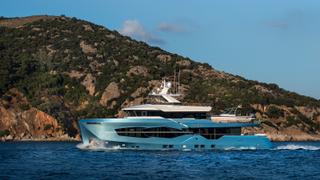 Turkish yard Numarine has delivered the second hull in its 32XP series named Calliope. The 32.5 metre yacht which will have her world premiere at the Fort Lauderdale boat show in November, was delivered to an experienced American owner. She follows the first hull, Marla, which was delivered last year. A third hull in the series is also under construction and slated for an autumn delivery.

Calliope features a displacement steel hull in blue and GRP superstructure. She features a five cabin layout, as specified by the owner, with the sixth cabin substituted for an extra saloon and bar on the upper deck.

As with Marla, Calliope features exterior and interior styling by Turkish designer Can Yalman. Her naval architecture by Umberto Tagliavini features a vertical bow and “rugged, hefty silhouette” with extensive angular windows.

Inside, Calliope has been customised to her owner’s preferences and features materials including marble, woods, leather and brass.

Accommodation is for 10 across five cabins, including a full beam 30 square metre master cabin forward, two VIP cabins and a pair of double cabins, all with ensuite bathrooms. The crew quarters meanwhile accommodates a staff of five across three cabins including a separate captain’s cabin. The crew area also includes a kitchen and laundry area.

Calliope has been designed for passage-making by night, keeping noise and vibration to an absolute minimum. She is can reach a top speed of 14 knots, cruising speed of 12 knots and boats a 4,000 nautical mile range at nine knots.