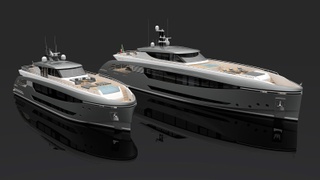 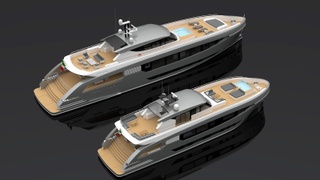 The Montecristo 30 and Montecristo 43 were both penned by Spadolini and sport “clean, sober and essential lines” that are “both classic and contemporary”.

Exterior features on board the two 30 and 43 metre motor cruisers include air intake grilles, dark strip glazing and a vertical bow.

Spadolini said the models “meet the modern needs of the market.”

“It made sense to start with these as the styling and layout can be easily adapted to create models in between the same design DNA.”

He added that both models “bear a strong family resemblance” to other Spadolini designs, such as the 48 metre Rossinavi superyacht Aslec 4 and 27 metre CCN Freedom, which was launched last year.

The main deck and foredeck areas on both yachts were a specific focus for Spadolini.

“Clients today expect outstanding liveability, both inside and outside,” he said. “So from the start I decided a distinguishing feature of the series should be a widebody main deck to maximise interior space.

“Another request is that they want to be able to make full use of the foredeck, which became a second signature feature.”

Accommodation on board the 43 metre yacht comprises five guest cabins; three VIPs and two singles on the lower deck. Crew accommodation meanwhile is for a total of six staff, as well as a captain’s cabin on forward of the main deck.

Accommodation on the 30 metre model comprises two VIP cabins amidships and a single accessed from the main saloon. Crew accommodation is for five staff, with the captain’s cabin on the lower deck.

Both models have a crew dinette while the 43 metre also has a dedicated staff laundry.

Both yachts feature terraced aft decks leading down to the swim platform and a pool on the foredeck. An aft section of the sun deck on both models will also be made of glass and designed to incorporate solar cells to provide auxiliary hotel power.