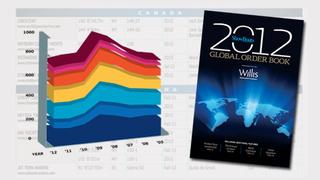 State of the superyacht industry revealed in 2012 Global Order Book

Although the Global Order Book for 2012 is down again, the descent has slowed to just under a 3 per cent decline year on year. This is the third year of decline in the number of yacht projects under way or on order. The statistics measure both custom and production yachts – power and sail – of 24 metres (80 feet) and up.

While there are more yards than ever before building yachts – 209 – the map of yacht construction powerhouses remains unchanged. The top ten builder nations remain unchanged from last year and Italy remains number one with 317 projects reported for a total length under construction of more than 11,580 metres (38,000 feet).

Among the top 20 builders, Ferretti Group and Azimut-Benetti switched places this year with Azimut-Benetti nosing ahead on the basis of the total length of boats in production (2,640 metres/8,661ft), while Ferretti Group, with 76 projects, actually has one more boat under way. When it comes to custom orders, Benetti is the leader at 33 projects with Lürssen second and Feadship third. The average size of yacht under construction at Lürssen, however, is more than twice the size of that underway at Benetti (107 metres/353 feet vs. 43 metres/142 feet). Feadship has eight projects underway at an average length of 71 metres (233 feet).

The 2012 Global Order Book can also be ordered online