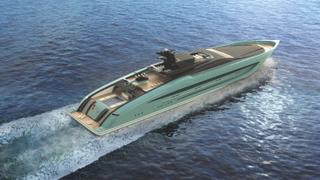 As the name would suggest, the design is geared around performance with an estimated top speed of 32 knots delivered by four 2,600hp MTU 16V2000 M96 diesel engines twinned to Rolls-Royce water jet drives.

Despite such a blistering turn of speed, this sleek tri-deck motor yacht would also be capable of a cruising range of 3,500 nautical miles at 12 knots. Meanwhile, a pair of Seakeeper M35 stabilisers with active interceptors will ensure a smooth cruising experience and a peaceful night's sleep at anchor.

Her ample 300 square metre aft deck features a superyacht swimming pool with an infinity edge and a retractable LCD tinted glass awning, which covers a section of the aft deck.

Project Speed’s two large superyacht tender garages have been designed to house a pair of ten metre limousines and a custom-built amphibious car, as well as a selection of Jet Skis and water toys.

Moving forward and a hidden outdoor lounge area with a superyacht spa and bar area is located under the retractable foredeck. Other key features include a superyacht helipad, an elevator, two Jacuzzis and a spectacular fireplaces.

Accommodation is for up to 12 guests split between six cabins including a master suite complete with a private study and five further staterooms. Room for 28 crewmembers ensures that the guests' every whim can be catered for.