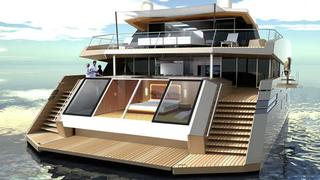 The 35 metre cat boasts a beam of 13.8 metres and living space of 680 metres squared. The draft is just 1.7 metres. The tri-deck Sunreef has been created by the Polish yard’s Gdansk-based in-house team and is a continuation of the Sunreef Power 90 which was unveiled in 2013.

Sunreef says the idea was to create as large a living area as possible and the saloon itself is 80 metres squared. Also on the main deck is a kitchen, an office, gym and the master suite comprising 50 square metres towards the bow. The suite features a separate dressing room and bathroom.

The concept drawings feature large panoramic windows and there is also a 60 metre terrace and optional folding side balconies on the main deck. Ten guests and six crew are accommodated in eight large cabins in the hulls. Each hull is accessed by its own staircase and each cabin has a private entrance.

At the stern, the garage space can hold a motor dinghy for 12 people, two PWCs, four sea bobs and diving kit. With twin MTU M94 engines giving 2600hp each, the multihull will manage a top speed of 30 knots and can be fitted with standard drives, Volvo IPS or water jets.