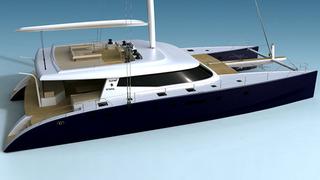 Rumours about a new order for Sunreef Yachts during the Cannes Boat Show have now been confirmed. Within months of being commissioned to build a Sunreef 82 Double Deck, the Polish yard specialising in multihull superyachts has secured another contract for a Sunreef 80.

With a length of 24 metres, this sailing catamaran commissioned by European owners will be the first in a new high-performance series based on light displacement. Designed by the in-house team with a low profile to optimise aerodynamism, this Sunreef 80 will be built using an advanced composite sandwich combining vinylester, PCV foam and carbon/fibreglass, and will have a carbon mast and boom. The weight will not exceed 45 tons, and 60 tons fully loaded.

The modern minimalist interior, also designed by the in-house team, will accommodate nine guests and four crew. The master suite will be on the main deck – a first for Sunreef on a single deck catamaran – while two double guest cabins, a children's cabin and the crew area will be distributed between the two hulls.

On the technical side, this catamaran will have a single mast of 30.7 metres and a total sail area of 340 square metres, and in light winds she will be powered by twin 240hp Yanmar engines.

The construction of the Sunreef 80 has already started with a launch scheduled for March 2013.