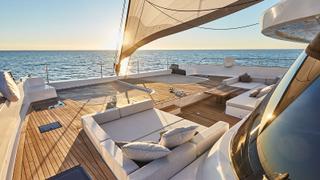 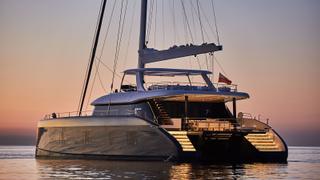 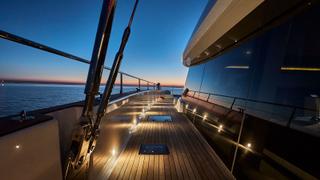 The first 24.4 metre yacht of the series, named 7X, was put through her paces for the first time in the Baltic Sea.

It comes after the yacht was debuted earlier this year, alongside the 18.3 metre Sunreef 60, at the Polish shipyard’s Pomorskie Rendezvous in Gdansk. The Sunreef 80 is also set to appear at the Cannes Yachting Festival in September.

7X, which will be kept in Croatia following her delivery, features a four-cabin layout with an interior décor defined by teak wood, backlit quartz and metallic accents.

A choice of five layouts are offered with up to five guest cabins, including a master suite with its own superyacht office, situated in the starboard hull. Meanwhile, the crew quarters allows for a staff of up to five people, depending on the layout selected.

However, the real benefit of this design can be seen on the upper two decks, which make good use of the 11.5 metre beam. The spacious open-plan saloon is situated on the main deck, while the equally large superyacht sundeck boasts a Jacuzzi, sunpads, wetbar and barbecue and is shaded by a hardtop Bimini with glass inserts.

The interior décor, also developed by the in-house team at Sunreef Yachts, places an emphasis on purity, space and light, with generous use of teak. However, the yard adds that there is plenty of room for customisation and personalisation.

Two engine options are offered for this multihull superyacht, the largest of which delivers 560hp of propulsion.

Other superyacht projects under development at the Polish yard include the Sunreef 80 Carbon, which is a similar design, but built from carbon fibre instead of composites for a lighter overall weight and enhanced sailing performance.